The Universe Is A Hologram?

“The universe is a hologram and everything you can see – including this article and the device you are reading it on – is a mere projection” according to a model proposed by theoretical physicist Juan Maldacena in 1997 in which he theorized that gravity arises from infinitesimally thin, vibrating strings that could be reinterpreted in terms of well-established physics. The mathematically intricate world of strings, which exist in nine dimensions of space plus one of time, would be merely a hologram: the real action would play out in a simpler, flatter cosmos where there is no gravity.

Now Japanese researchers have attempted to tackle this problem by providing mathematical evidence that the holographic principle might be correct, according to a report in Nature. The holographic principle suggests that, like the security chip on your credit card, there is a two-dimensional surface that contains all the information needed to describe a three-dimensional object – which in this case is our universe. The universe we believe we inhabit is a 3D projection of a 2D alternate universe.

This theory – and it is just that – does not play well with theocratic notions of an intelligent designer – an all-knowing, all-powerful entity that created everything we know or ever will know. The “proof” for the existence of such a being lies in a collection of allegorical tales attributed to enlightened prophets, assembled over time into differing versions that are in turn subject to varying interpretations offered by those very same prophets who claim to know these beliefs to be “true”. Basically, the “truth” is true because I say it is.

I have often thought that the concept of an intelligent designer is at least tangentially congruent with the unified theory personified by the search for the god particle espoused by theoretical physicists. Both positions and their variants, at their bases, begin from similar origins; the quest for knowing the unknowable. For devotees of each faith, the voyage is one of passion and revelation. But I have to give the edge to science over theocracy, because theocrats believe the “truth” is inviolate, whereas science believes that truth is true until proven false by other truths.

I will admit that theology – at its core a tautological construct – is not my strong suit even though I was educated by the ultimate Jesus freaks – The Soldiers of Christ from the Society of Jesus – better known to the world as the Jesuits. And now they even have a pope – which should probably be the subject of another post.

Anyway – back to holograms and holography.

When the hologram is illuminated by the original reference (laser) beam, each of the individual zone plates (created by interference and diffusion) reconstructs the object wave which originally produced it. Subsequently as a result, these individual wavefronts add together to reconstruct the whole of the object beam.

The viewer perceives a wavefront that is identical to the wavefront scattered from the original object onto a recording medium (in this case the 3D projection we perceive as “The Universe”), so that it appears to the observer that the object is still in place even though (or if) it has been removed. This image is known as a “virtual” image, as it is generated even though the object is no longer there.

So what does this definition of terms have in common with cosmology, astrophysics, theology, and how it is interpreted by scientists and/or creationists? 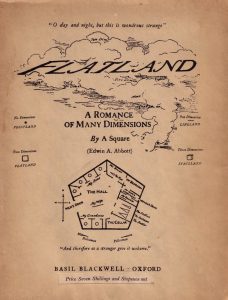 For the astrophysicists and cosmologists in this discussion, the proposition that the universe is a hologram or more accurately the product of holography on a cosmic scale, this hypothesis boils down to a postulation that the Universe is the product of a light show created from objects that no longer exist or are in other unknown or unknowable “alternative realities” where nine possible mathematical dimensions are projected from one two-dimensional plane, conjuring up ideas discussed in Edwin Abbot’s 1884 novel Flatland. The universe is a chimera which, if it exists at all, consists of past light. Only that.

For theocrats, the intelligent designer can be seen as being nothing more than an amalgam of Lewis Carroll’s “Cheshire Cat” and Frank Baum’s “Wizard”, which I would venture was the point both authors were attempting to illuminate. The object created by this mythical designer – or god – and these literary doppelgängers – is an illusion; smoke and mirrors; a light show. The only thing giving it substance is faith – the belief that an intelligent creator is real, borne simply from a series of folk tales, myths and allegories assembled into a book compiled by men. Forget the titles ascribed to these scribes: priest, prophet, saint, king, minister, sadhu, caliph, ayatollah, rabbi, brahmin, shaman, lama – they were all just men (and women – but mostly men).

These brahmin and their followers were (and still are) obsessed with the belief that there must be a better world than the one we live in and that place is controlled by a creator who made all things, including the fucked up mess they see themselves in. To the true believer, the solution for enabling a transition to this better place – heaven (and out of hell) – is prayer: to petition this creator for help. Some people were better at petitioning than others so they were appointed (or appointed themselves) to be intermediaries or channels to this creator.

The faithful are then presented with an hierarchical universe structured on three levels; at the top sits (or lies if you’re a buddhist) the creator of all things good and evil, including the world that these faithful want relief from; the middle is inhabited by a brahmin class that act as go-betweens and aggregators of communal complaints, desires, and rewards –  that ideally are channeled back up to the creator (capitalism in its purest form); and at the bottom the lumpen precariat of long suffering petitioners who just want a better life; to be freed from the hell-on-earth they believe was imposed on them by others but in fact was enabled by themselves because of their belief in this tautologically fabricated kakistocracy to begin with.

So the lumpen pray for redemption (from what?) and salvation (from whom?) and enlightenment (now that’s something to pray for). But here is where this “holy -gram” collapses under it own weight.

The assumption is that the creator, as an all powerful entity, can only be “reached” by acts of intersession from the brahmin class whom act to channel the pleadings for mercy from the faithful. But if these pleadings, these prayers can change the “mind” of an all knowing and all powerful creator, then who is more powerful? Certainly not a creator whose only fabrication might be just a light show. The main question then remains: “who created whom?”

We are all gods. We give both objects of desire and ourselves – power. The reason for living is to understand that power and learn how to use it. If you want to change things, change them. Don’t pray for someone else to do it for you.

Either formed by intelligent design or holographic projection aside, the universe will at some point in time cease to be. As astrophysicist Neil deGrasse Tyson related in a recent Bill Moyers interview: 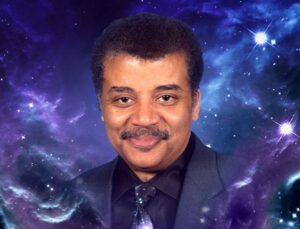 All evidence points to where we are on a one-way trip to oblivion. As the universe expands, temperature drops, all stars eventually run out of fuel, and one by one the stars in the night sky will turn off. And in the extremely distant future – a quadrillion years or more – there will be no light coming to us in the day or night sky because all stars would have died. And so the universe will end not with a bang, but with a whimper and not in fire but in ice.

e.e. cummings knew. Maybe poets are in fact the real gods. If so, maybe we should be reading more poetry and not the bible.